We Are the Perfect Girl, by Ariel Kaplan 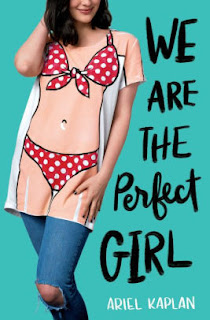 In this retelling of Cyrano de Bergerac, Aphra is the brave and fearless fighter.  Skilled with words and outspoken, she's a loyal friend to her little brother and to her best friend Bethany.  While Bethany definitely has the looks, she becomes tongue tied in the presence of handsome Greg.  And as much as Aphra keeps trying to encourage her, Bethany seems condemned to sit on the sidelines.  Aphra won't stand for that though and she helps Bethany find the words to capture Greg's attention.

Meanwhile, Aphra is developing a phone app that uses artificial intelligence to chat with people.  The app is supposed to be anonymous and confidential, but when the program starts failing, Aphra fakes results by intervening and writing the app's responses herself.  That's when she discovers that Greg has been confessing to the app.  Unable to help herself, Aphra responds, trying to gently nudge him towards her best friend.  It doesn't take long for Greg to figure out that the responses are not coming from a computer.  And when he calls her out, she is forced to confess, but due to unfortunate circumstances, he mistakenly assumes that the app's author is Bethany.  Now smitten, he falls madly in love with her.  This leaves Aphra in the unenviable position of coming clean with Greg about her true identity and confessing to her best friend that she's been secretly chatting with her love.  The fact that Aphra actually likes Greg as well only complicates matters.

Clever is the way that Kaplan has managed to modernize and adapt Rostand's classic play, the book also shines for its clever writing. The book is hilarious, with a whole slew of amusing and original anecdotes and scenes (ranging from an awkwardly misplaced swimsuit donut to a grand confession in front of an entire school assembly).  At times, these are so clever that they overwhelm the story itself, threatening to make the novel just one funny scene after another, but it mostly works.  Meanwhile, I loved the characters.  The dynamics with Aphra's family are particularly refreshing (I'm always a fan of parents who actually do more than forbid the heroine to do something and then ground them afterwards).  And Aphra's journey from self-obsession towards self-acceptance is real and meaningful.  A delightful read.

Sadly, the unusual and notable inclusion of rarely-seen-within-YA Russian to the story falls flat due to the multiple errors in its usage in the book.  But A for effort, nyet?
Posted by Paul at 10:49 AM