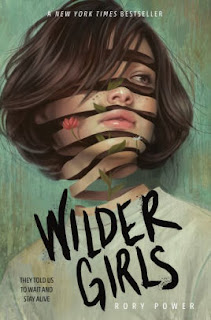 In case you are looking for some fiction to put you in the mood for a global pandemic....

When the students at the Baxter School for Girls on a remote island off the coast of Maine start contracting a strange and fatal disease, they and their island are placed under quarantine.  The disease, which they call the "Tox" causes rapid mutations that painfully disfigure the body and appear to be tied to the ecology of the island itself, affecting the animals and even the plants.  While the CDC works on a cure, no one can leave.  Regular supply runs drop off what the girls and their teachers need to survive, but otherwise the residents are on their own as the they grow sick and die terrifying deaths.

They told us to wait and stay alive.

A year and a half later, junior Hetty recounts the state of existence for the survivors.  There is still no cure and a vast number of the girls (and nearly all of the adults) have died.  Supplies are running low and the wildlife on the island has grown so hostile that venturing outside of their school grounds is too dangerous to consider without weapons.  Things are coming apart.  Hetty (along with her friends Byatt and Reese) suspect that the government is giving up on them and fight a last ditch effort to survive as the supplies stop coming and panic sets in.

A grim and brutal horror novel that turns a boarding school into a killing field.  From the start, the tension was captivating, the situation dark and gruesome.  The suspense picked up as more discoveries and dangers unfurled.  But by the time we reach the half-way point, things start to tip into the realm of silly and unbelievable.  Characters start behaving irrationally and counter-intuitively,  A super generous interpretation would be that everyone started to go mad, but the stupidity of some of the actions belie a more plausible explanation -- trying to keep the action going and wrapping up the story.  In sum, the last hundred pages unravel the story in a not-so-glorious way.  Still, there's no denying the topical relevance of reading this book while you're riding in a plane with a bunch of coughing people.  Definitely, one of the creepiest reads I've had in a long while!
Posted by Paul at 12:56 PM