A Long Walk to Water, by Linda Sue Park 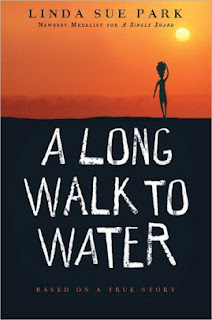 A story of two young Africans.  Nya and her family live in a parched desert.  For half of the year, she spends her entire day making two round trips to fetch water for her family.  For the other half, she digs in mud for water that is frequently disease-ridden.

Salva is a young South Sudanese boy who is forced to flee for his life when soldiers attack while he is at school.  Separated from his family, he struggles to survive, crossing inhospitable terrain and ending up in a series of refugee camps and dreaming of a better life.  Told in alternating voices, the stories of Nya and Salva eventually connect in a surprising and dramatically appealing way.

Almost certainly, this book is read more often for a classroom assignment than for leisure, but it is easy and quick to read.  Largely based on the real-life experiences of Salva Dut, one of the "lost boys" of Sudan who were rescued from Kenyan refugee camps and resettled in the United States, the book is pretty intense reading.  People get killed and die horrible deaths.  While retold in an entertaining way, the mood is factual and it reads like non-fiction.