The Last Voyage of Poe Blythe, by Ally Condie 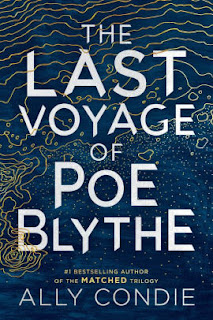 Two years ago, Poe Blythe was captaining a dredging operation on the river to extract gold for the Admiral.  A heady assignment for a fifteen year-old, but she had her wits about her and she had her best friend Call.  But then Raiders attacked and captured the boat and killed Call.  Poe barely escaped with her life.  Now, the Admiral wants to send her out on the same mission.  He wants more gold.  She wants revenge.

Defended with special custom armor that Poe herself designed, their dredging vessel should be impregnable.  But from the start, bad signs abound.  There is at least one saboteur on board and Poe needs to find them.  She'll fail.  And as events spin out of control and the mission collapses, Poe finds herself thrown by events far greater than even she imagined.  In the end, the thirst for vengeance will be replaced with a much higher calling.

Fast-paced action and adventure with a young cast of characters in a post-apocalyptic world.  There's not much time here to dwell on adolescence in a story where characters betray each other every other  page and the plot twists and turns.  Instead, like all decent adventure stories, this is all about the hero(ine)'s growth from callow and emotionally-unfocused youth to true leader.  Poe is tough as nails, brave, and inspirational.  The story is exciting.  The setting is exotic enough to be interesting.

My only complaint:  I wanted a schematic of the dredger -- which is a character in its own right -- in the book.  Condie's descriptions were never quite enough for me to picture where the vast majority of the action takes place.  Having it to reference throughout the story would have helped.
Posted by Paul at 7:58 PM