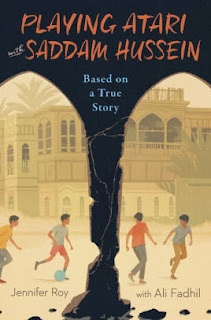 In this slightly fictionalized autobiography, Ali Fadhill recalls his life in Basra Iraq during the forty-two days of Operation Desert Storm in 1991.  Only eleven years old at the time, the war was a period when his family worried about his father on the front and tried to adjust to living life under siege.

And for a child, the things that mattered most were often trivial.  Ali's strongest memory of the day the bombs started to drop was of knocking his brother off the top score on their favorite video game.  And while he would witness atrocities like summary executions, his mother's decision to burn his comic books when they ran out of fuel made a bigger impact at the time.

The book is more of a memoir than a children's story.  Reading it,  I tried to picture whether a modern child could even relate to this moment in history.  It's too recent to be considered history and too long ago for even their parents to remember.  Admittedly it's fascinating to read the first-hand account. I'm always interested in seeing how children process the horrors of war.  Overall, though, the writing is stark and functional and there's not much of a story.
Posted by Paul at 6:49 PM