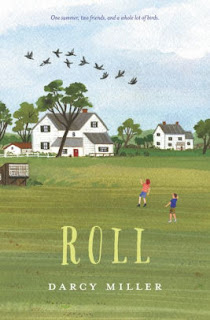 Eleven year-old Ren isn't thrilled about his family's recent move into the country.  And he's not so sure about starting cross country running in the fall, especially when it is clear that his father is so much better at running than he'll ever be.  But a girl next door and her weird hobby does catch his interest. She flies Birmingham Rollers, a type of pigeon which performs spectacular diving feats, and she's training her flock for a regional competition.  Ren's captivated by the birds and gets caught up in helping her train them.

While he's gained a new friend and a new interest, he's aware that he losing things too.  His best friend Aiden is going out for basketball and seems to want to spend all of his time with other boys on the team. The differences between them seem to be becoming a bigger and bigger deal.  And Ren needs to come clean with his father who is training Ren to get him ready.  But how does Ren tell his father he's no longer interested?

I always like a story that has something to teach and I had certainly never heard of training pigeons, let alone birds who could do these tricks (it's worth Googling!).  I also liked having a book about a boy that wasn't adventures and gross-out.  There are so many books out for girls about losing childhood friends in middle school years, but really not much about boys (who go through many of the same changes).  It's nice to see someone create one.
Posted by Paul at 2:53 PM