The Quiet You Carry, by Nikki Barthelmass 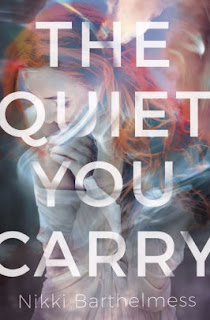 The story opens with Victoria thrown out on the street at 3am.  Her father, accusing her of sexually attacking him, wants her sent away.  Victoria finds herself thrown into foster care, with no home or family.  Up to now a star student, her education is in jeopardy.

She ends up being placed in a foster home two hours away, dealing with an incompetent and overloaded social worker and an abusive foster mother.  She is worried that her father is going to hurt her stepsister.  But as much as these problems are not her fault, it is Victoria who has to rescue herself.

The novel does that annoying thing where the heroine refuses to help themselves.  Through all the suffering, she can't bring herself to accuse her father of abuse (yet grows angry that no one will help her).  The thing that she is carrying – the truth—could have been spoken earlier and created a much shorter story.  But the device bothered me less in this case because Victoria kept fighting even when she wasn’t doing the right thing.  And she recognized early that staying silent was hurting herself and others.

Enthralling and hard to put down, Barthelemass portrays the hard reality of foster care where adults don’t always do what they are supposed to do.  Against these seemingly insurmountable odds, Victoria comes through as inspirational.  I also appreciated that not every adult was evil.  Even the harsh foster mom reveal subtleties that make her, while not nice, at least human.  A good read.
Posted by Paul at 10:17 AM