There's Something About Sweetie, by Sandhya Menon 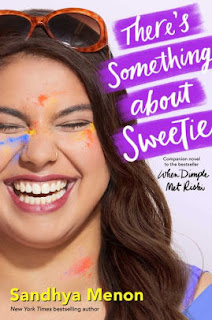 Sweetie is a fat girl and she doesn't mind if you think that of her.  After all, her body size is an established fact.  But if you try to tell her that being fat is somehow a bad thing, she'll point out that she can outrun any girl or boy on the school's track team.  Far from being a slur, Sweetie has embraced her bigness as a source of pride and a sign of beauty.  Now, if she could only get her mother to agree and stop acting so embarrassed of her daughter's appearance.

Ashish is a formidable basketball player.  Popular and friendly, he has a way with girls.  They love him and he has flitted from one relationship to another.  When he is cruelly dumped by Celia, however, things are different.  He really liked her and the rejection sends him into a funk.  He simply can't get over her.  With his charm failing him, he throws himself at his parents for help.  They are convinced that they can find him the perfect girl and Ashish is just desperate enough to take them up on the offer.  They find Sweetie.

Ashish and Sweetie actually have chemistry, but Sweetie's mother puts the kibosh on the whole idea.  Afraid that her daughter will become the butt of jokes and be humiliated because no one as handsome as Ashish could possibly want her overweight daughter, she forbids them from being together.  But they end up going behind her back.  Ashish's parents, less than thrilled at the idea, force them to go on a series of unusual dates (the first of which is to the temple) that surprisingly solidify the respectful relationship that develops between Ashish and Sweetie.

The result is a sexy romance that strikes all the right notes:  a couple of kids with a very mature perspective on what makes a relationship work; a healthy respect for tradition, family, and (gasp!) even religion; and a heartwarming story about people who truly don't let bodyshaming control their lives.  As with When Dimple Met Rishi, Menon has created a joyful story filled with contemporary Desi characters that transcend stereotypes, while remaining true and respectful of those cultures.  This is an all-round winner!
Posted by Paul at 10:45 AM