Here in the Real World, by Sara Pennypacker 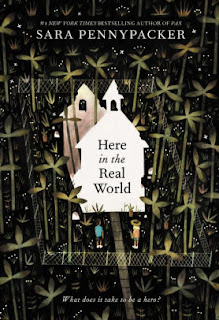 Ware doesn't like playing with other kids.  They make far too much noise.  He'd be happiest spending the summer at home alone, but his parents have other ideas.  They want him to make "meaningful social interactions" with kids his own edge at the Rec (a local summer program), a place which Ware can't stand.

But he's found a way to make things work.  There's an abandoned half-demolished church next door where Ware can escape to and explore.  Imagining himself as a knight, he transforms the ruined building into his castle, complete with a throne and a moat.  But he's not alone.  There's a girl named Jolene there who is trying to plant a garden of papayas, with dreams of making money by doing so.  In her mind, Ware is full of silly ideas and he should start living in the real world as she does.  In time, Ware learns enough about Jolene to understand from where her cynicism comes.

The resulting tale is a gentle story of two outcast middle schoolers spending a summer together at their own speed.  There's a world of discovery and adventure here, all placed in a single abandoned lot.  For Ware, the summer is about learning to embrace his quiet introverted nature.  For Jolene, it is about finding that even the real world can have some happiness within it.

As rooted as this story is in reality, it has all of the whimsical magic of Pennypacker's animal adventure Pax.  Like that novel, Ware and Jolene innocently explore a world full of greater evils than they can really imagine, safe by fate and good fortune.  Sweet and magical.
Posted by Paul at 8:13 PM