The Boy and Girl Who Broke the World, by Amy Reed 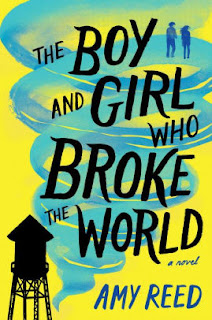 Billy lives with his grandmother.  His Mom was a junkie and his uncle's a famous rock star recovering from being pretty much the same.  Given grandma's penchant for smacking Billy around, it isn't too hard to see how she messed up her children.  Billy is your typical shy loser who gets alternately beaten up by the bullies at school and his grandmother.

Rome and Carthage are dead-end, washed-out western Washington town, whose glory days lay in lumber.  Aside from the uncle, the only notable thing about them now are being the setting for a popular series of YA fantasy books.  Dying industry has left behind a bunch of drug-addled losers who worship president King (a mildly incoherent and majorly narcissistic leader with a habit of threatening to bomb people).

Lydia dreams of dancing professionally.  Before her mother died, she loved her dance lessons, but afterwards there was no money for lessons.  All of that starts to change when Billy's uncle disappears from the public eye and reappears in Billy's attic.  And that isn't the only weird thing that happens.  There's a freak tornado that leaves behind a giant pit in the earth, growing evidence that Sasquatch is loose in the woods, and plenty of signs that Billy's house intends to eat him.  And, of course, the end of the world is coming very soon.

Wry and biting story that, despite its rather loony plot, has a great deal of fun along the way.  The style is very much in the Libba Bray tradition and anyone who enjoy the absurd humor of Going Bovine will love this novel. I don't know if I needed the end of the world to shake things up at the end, but it did conveniently ties up a lot of disparate ideas.
Posted by Paul at 5:15 PM