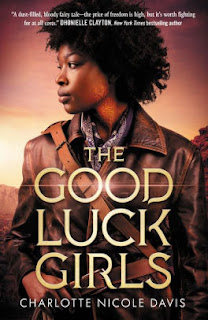 Sold to a bordello when she was little, Clementine has turned sixteen and is about to have her "Lucky Night" (when she is sold to the highest bidder for her first working evening).  When the John ends up dead, Clem has to make a run for it.  With the help of four friends, they make a daring escape that sets up a desperate race for freedom.  But the world they live in -- called the Scab -- isn't just populated with corrupt lawmen and people willing to give you away for the right amount of Shine.  Raveners, who were once men, but have now become something truly evil, that can enter your mind and destroy you from within.  And there vengeful spirits come out at night and tear you apart.   Against all these forces, what chance do five young women have to survive?  Yet the drive to survive and be free is strong and the resulting adventure is a wild one in this fantasy/Western hybrid.

As the story starts out, I was reminded of the "Heart of Gold" episode of Firefly because of its combination of Western and fantasy/sci-fi tropes.  Aside from the fact that they both begin at a brothel, the stories aren't similar, but the feeling of this novel owes a debt to Joss Whedon -- not just Firefly but also a good dose of Buffy.  Davis has woven a complex and immersive landscape for this book.  The Wild West stuff mixed up with this crazy paranormal stuff could have been a colossal train wreck, but she's made it effortlessly fit together.

The plotting of this story is relentless.  We never really get a break as we careen from one moment of peril to the next.  That pace is hard to maintain and at some point it starts to feel contrived.  Just how many near-death situations can these girls escape?  The ending fizzles out as Davis can't one-up herself enough to create a true climax.  All of which leads us to the other issue:  character building.  I'm not going to say that she didn't put a lot of effort into these characters, but they are fuzzy and amidst all of the action I sometimes had trouble keeping straight who was doing what.  Five (six if you count the boy) characters are a lot to sort through and build up to be sufficiently distinct (I never did quite figure out Tansy and Mallow in particular).  Major kudos for creativity and an excellent setting, high marks for a story I got fully engrossed in, but maybe do less and make more of it by building up those characters and throttling back on the mayhem?
Posted by Paul at 8:05 PM