The Lie Tree, by Frances Hardinge 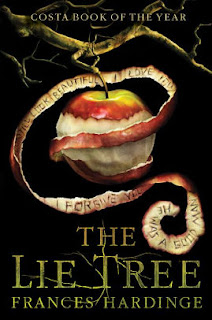 In Victorian England, young women do not pursue careers in the sciences.  Faith's interest in her father's studies in natural science is thus discouraged.  But for every time her mother tried to keep her close to the hearth, Faith doggedly tagged along with her father.  It was she as a little girl, after all, who found her father's most famous fossil discovery.

Now a young woman, Faith is concerned as her father (and the family by extension) falls into disgrace because of evidence that her father's work is fabricated.  A fortuitous summons to the small island of Vane to participate in a dig is just the tonic for escaping scandal.  But the scandal and worse follows the family and Faith becomes aware that father is hiding a much larger secret: a rare plant that survives in pitch darkness, lives on lies, and produces a fruit that can allegedly provide True Knowledge.  Confronting her father, she is taken into his confidence and helps to secure the tree in a safe place.  The next morning, her father is dead, allegedly from suicide.  With time running out, Faith must unravel the mystery of her father's death, the identity of the killer, and the mystery of the tree itself.

A dark Victorian mystery with some wonderful creep factor and macabre images.  Lots of twists and surprises and a stellar well-written cast of characters.  I'm not a big mystery fan, but this was enjoyable on several levels.  A story with depth, competing motives for doing both great good and dark evil.  And, of course, the tree itself which is everything one wants from a diabolical plant. Without introducing any jarring anachronisms, Hardinge does a great job of introducing an empowering and empowered heroine who exposes and challenges gender inequality while being equally and fatally blind to it in the story's most clever twist.  It adds just another dimension to this satisfying story of dark deeds and tragedy.
Posted by Paul at 2:33 PM