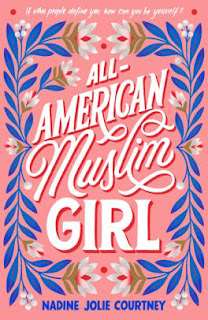 When Allie and her father are out and about, everyone can tell that her Dad is an Arab and suspect he is a Muslim, but Allie takes after her Caucasian mother and people frequently can't tell her heritage.  This gives her a unique ability to be privy to people's prejudices and hear the things people say about Muslims.

She's curious about that heritage:  what it means to be Muslim. Her father is largely lapsed and has discouraged Allie from practicing Islam, so she launches out on her own, finding a study circle of young Muslim women and learning more about the faith.  As she learns more, she struggles with what she believes and with wondering where Islam lies within contemporary American society.  Should she pray?  Should she continue to date?  Should she veil?  Should she fast during Ramadan?  And how can she explain to her atheist father why all of this appeals to her? Allie's clearly modern and open minded, but drawn to the traditions of the faith and the bonds it helps her form with her family (especially her grandmother).

It's a thoughtful exploration of spirituality and faith.  There are plenty of political dimensions to this story, but I'm drawn to it for its spiritual quest.  There are few Young Adult books that are respectful about religion, let alone embrace the pursuit of it, so the affirmation of Allie's search is a welcome addition (to put this in perspective, Converting Kate by Beckie Weinheimer -- published in 2007 -- is the most recent book in this subgenre I have read).

Courtney has a lot of ground to cover.  One particular agenda items (arguing that Islam is not necessarily a misogynistic faith) can lead to some stilted dialogue, but I think her point is well made.  The side plot about whether Allie should date or not is less developed.  It suffers from really being two questions:  how Allie should reconcile her relationship with her boyfriend when his father is a famous bigot and how Allie can justify dating of any sort when more conservative Muslims believe that dating is forbidden altogether.  It never really gets successfully sorted out, and perhaps cannot be.  Allies's reconciliation with her father (and perhaps her efforts to reconcile her father with his faith) is a final element of the story.  By this point, we're basically totally exhausted so I'm glad she doesn't spend a huge effort on this thread.  But it also reaches a satisfactory partial resolution.

It's a long book and not always as tight as it should be.  But life is messy and Courtney raises many thought-provoking questions in an entertaining story.
Posted by Paul at 5:18 PM