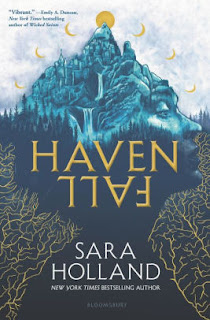 At an isolated inn the Colorado Rockies called Havenfall, lies a place where portals join our world to the Adjacent Realms.  Every summer, delegates from those worlds gather for an inter-dimensional Davos summit.  Maddie, the niece of the Innkeeper, is trying to avoid her family this summer and comes to Havenfall to work for her uncle and see her old friend Brekken.  She's grown up at Havenfall and has always enjoyed spending time with the delegates.  Some day, she wants to take over as Innkeeper when her uncle is ready to retire.  Spending the summer will give her an opportunity to start learning the ropes.

But the first night, while Maddie and Brekken are off reigniting the fire between them, an incident occurs.  The result is a dead body, a missing bodyguard, and the Innkeeper fallen into some sort of coma.  Someone is trying to sabotage the Summit and perhaps much worse.  With the Innkeeper incapacitated,  Maddie has to step in and take over her uncle's role.  Furthermore, she needs to find the killer and determine what they are up to.  This leads her into a series of evolving and expanding mysteries.  Full of twists and turns, the mystery builds to a stirring climax.

Surprisingly entertaining.  As the first of a series, Havenfall is mostly about establishing the stage.  A lot of energy is put into exposition and explaining the complicated politics of the various realms, but the story is far from dull.  There's near constant suspense as characters cross and double cross each other in ever more creative ways.  The story is not always as organic or as smooth as one might like, but it delivers the goods in the end.  Characters also suffer a bit to the action, so that tantalizing views of Maddie's relationship with her family or the romantic sparks with Brekken are never fully developed.  Hopefully, that will be forthcoming in the next installments.
Posted by Paul at 2:53 PM