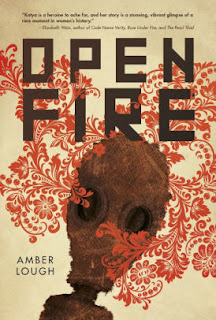 (I never thought I would read a YA book that opens with Olga's Revenge. This colorful anecdote from Russia's foundation legend forms an uneasy parable for this fictionalized account of the Women's Death Battalions of WWI.)

In Petrograd in the spring of 1917, it is obvious that things are falling apart.  The Tsar has stepped aside to allow the liberals and socialists to form an ill-fated attempt to keep Russia in the War.  Nonetheless, Russia is losing.  On the sidelines, Lenin and his Bolsheviks are set to strike when the opportunity presents.  For a young woman like seventeen year-old Katya, there is an itch to do more than work in a munitions factory.  So when an announcement goes out that healthy young women are being recruited to serve in combat roles and form a batallion made up entirely of women, she and her friend Masha answer the call.  Training is brutal and rushed and soon enough the young women find themselves on the front line.

Given how desperate the Russian position was in the Summer of 1917, it's hard to read this story with anything but dread.  The Revolution is still months away (and the book doesn't venture beyond July) but like a grenade with a pulled pin, all signs indicate that an explosion is inevitable. That a group of young women trained and fought with exceptional valor not only against an overwhelming foe, but also against sexism and discrimination from their own comrades makes for a thrilling ride.  It is an amazing story and well researched.

Be forewarned that the novel features graphic and intense violence.
Posted by Paul at 5:38 PM