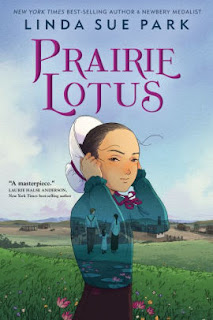 Hanna and her father have come all the way to LaForge, Dakota Territory from California to make a new life.  Carrying only what they can haul in a wagon, Papa wants to set up a store and make a home.  Hanna dreams of finishing her schooling and sewing dresses in Papa's store, just like her mother did before she died.  But For Hanna, her modest dreams are beset with barriers because she is half-Chinese.  In the 1880s, in the Midwest, Asians are rarely seen and never tolerated.  Even the marriage of Papa and her late mother would be considered illegal.  Attending school is potentially also illegal.  With immense fortitude and drawing on her memories of her mother for strength, Hanna faces the prejudice of the community and struggles to realize her dreams.

Hanna is an inspirational heroine.  She has grit and determination and the insight to realize that many conflicts cannot be resolved through direct confrontation.  Yet, she doesn't back down either and shows little fear of being outspoken even in front of grownups.  In this respect, she is more like Anne Shirley than Laura Ingalls.  She's the kind of literary heroine that parents want their children to read about.

Her dedication and work ethic are admirable, and she shows many talents including strong aesthetic sense and business acumen (to Papa's benefit).  And even though Papa is thick headed in a way common to literary fathers, he is a kind figure.  In truth, the good guys (in which we'll include Hanna's friend Bess, the teacher Miss Walters, and Mr Harris) are all nicely drawn characters.  The bad guys don't fare as well, but they are there largely as symbols of greater evil (racism, sexism, and prejudice).

The novel has received a lot of attention for being an attempt to "correct the errors" of Laura Ingalls Wilder.  As for myself, I am less interested in the politics of the book and more interested in evaluating the novel as a story.  That's a little difficult in this case because Park keeps a laser focus on the social injustices that Hanna has to endure.  Along with that, Hanna's responses are almost certainly anachronistic.  As a result, the political message really becomes the book for better or for worse.  That seems like a lost opportunity, as I'm convinced that a story about a Chinese-American girl on the range is intrinsically interesting enough that the heavy stress on the social injustices that she endures, while realistic, is hardly necessary -- a little goes a long way.  All that said, I enjoyed the book and recommend it.
Posted by Paul at 5:22 PM