Right as Rain, by Lindsey Stoddard 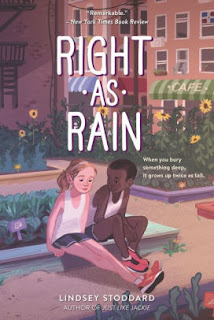 After the death of her older brother, Rain's parents decide to relocate to New York City from Vermont for a change of scenery and to start again.  For Rain, who is used to running through the woods with her best friend Izzy, life in the City is a challenging transition.  Everything is crowded and it is easy to get lost.  The people around her largely speak Spanish (which her two year's worth of study has hardly prepared her for).  And her mother warns her to be wary of dangers she has never worried about before.

She's not the only one having difficulties:  her father won't get dressed or leave his room and her parents are in fact splintering further apart.  And Rain comes to realize that her family are not the only ones suffering from changes and loss.  Frankie, a girl in their apartment, has lost her best friend.  Nestor, a homeless man in the neighborhood, has lost the job that gave him security.  The gentrification of their neighborhood has caused many people to lose their homes and their livelihoods.

As the first anniversary of her brother's death approaches, though, Rain comes to realize that there are plenty of things to be gained.  Life is full of losses, but it also contains victories.

It's a good book with no particular surprises except for the unexpected philosophizing on the emotional impact of gentrification on a neighborhood, and the lack of much on death, leaving old friends, or depression.  All three of these latter topics come up, but Stoddard doesn't want to dwell on them (and surely enough has been written on them already to make that excusable!).  Instead, this is really about Rain's reset to living in a new home, making new friends, and finding her place in the community.  It's a joyful story full of kindness and affirmation.
Posted by Paul at 10:52 AM