Sweeping Up the Heart, by Kevin Henkes 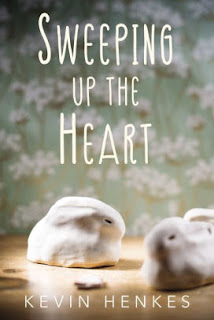 Amelia wants to do something different than just hanging around the house during spring break.  For once, her father has his break at the same time and she tries to convince him that they should go to Florida.  After all, lots of people go to Florida!  But he rejects the idea as being too "adventurous," and she ends up being stuck at home.

So instead she discovers a pottery studio, a love for working for clay, and a boy named Casey.  Casey in turn convinces her that the strange woman who has been loitering nearby is actually Amelia's long lost mother.  That isn't true, but she turns out to be someone just as special.

A very short and quick read, it didn't leave much of an impression on me.  Obviously, there's a story (as I summarized above) but there isn't much of a plot and certainly not much of a point.  The relationship between Amelia and Casey might have become something, but the mystery woman thread takes off before it can develop.  The mystery lady in turn is a bit of a fizzle.  I found it dull and full of nice but forgettable characters.
Posted by Paul at 4:42 PM