The Library of Ever, by Zeno Alexander 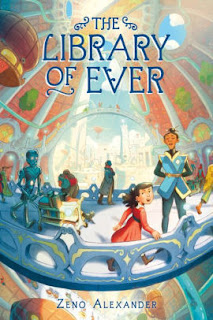 Lenora is bored out of her mind.  Dragged from one dull place to another by her inattentive nanny, she longs for an adventure.  So, when she is brought to the library she goes looking for the children's section.  She doesn't find it, but instead discovers a secret doorway that leads to the Library of Ever.  It's the place where all knowledge is stored and all questions are answered.  In order to stay she has to swear to the Librarian's Oath and accept an entry level position as the Fourth Assistant Apprentice Librarian.  Charged with answering people's questions about calendars, she proves adept and is quickly promoted.

Each step of the way, her challenges grow harder and harder, and she finds herself penguins and ant colonies, going into outer space, and rescuing lost kittens. Through it all, Lenora cleverly subdues her foes.  But the final challenge is the scariest of them all: facing off to the Forces of Darkness (as represented by the Board of Trustees) who are trying to remove books from libraries and promote "profitable" libraries. She must prove that she has what it takes to be a librarian and a defender of the library's motto, "Knowledge is a Light."

It is a fairly silly middle reader with a not-so-subtle message about the value of libraries and freedom of the press.  Things get a bit over-the-top at the climax but it all makes sense in the end, in a poignant way.  I enjoyed the book but it won't take you long to get through it.  I read it in just over two hours.
Posted by Paul at 8:12 PM