The Remarkable Journey of Coyote Sunrise, by Dan Gemeinhart 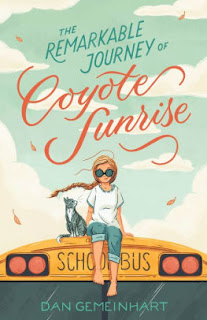 For the past five years, Coyote and her father have lived on the road, driving a converted school bus all over the country.  They live a free and casual lifestyle, going wherever they please.  But the one place they have never gone to is Poplin Springs WA -- their old home.  It was the death of Coyote's mother and her two sisters that drove them on to the road in the first place.

For Dad, going back is a definite "no-go," but now it seems that they need to do so.  When Coyote learns in a call from her grandmother that their old neighborhood park is about to be dug up, Coyote knows she has to return.  Five years ago, a few days before the tragic accident, Coyote, her mother, and her sisters assembled a box full of memories and buried it at that park, intending to return to it years later.  Now, it is perhaps the only physical remnant of that part of Coyote's life and it is about to be obliterated by the excavation.  So, Coyote launches a desperate plan to trick her father into driving across the country to rescue the box before it is gone forever.  It will take a lot of cunning, some dumb luck, and a huge cast of oddball characters to make it happen.

A road trip novel is made or broken by the adventures and the strength of the characters met along the way.  Part Room on the Broom and part Captain Fantastic, the adventures here can strain credulity, but the diversity of characters more than make up for it.  There's a gentle and plausible dramatic arc as Coyote and her father gradually reach the realm of acceptance and crawl out of the shell of denial that they have lived in for the past five years.  And, along the way, their fellow-travelers have their own revelations.

The novel pays back handsomely.  It's briskly paced and entertaining.  While not a deep read, there's enough emotional pay off to make this much more than some light middle reader.
Posted by Paul at 5:22 PM