This Is My Brain on Boys, by Sarah Strohmeyer 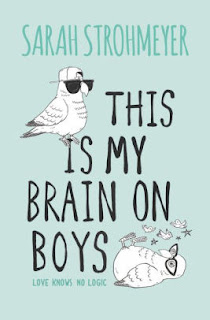 Addie Emerson plans to win the coveted Athenian Award so she can use the prize money to fund her attendance at Harvard.  To do so, she's developed a theory that attraction between the sexes is based upon sharing a common adversity.  And she's setting up a series of experiments where a boy and girl volunteer endure challenges together and then have their attraction for each other measured. It's the kind of understanding of attraction that Addie understands.  Because otherwise, she find most emotional reactions baffling.  If it's not all explainable through biochemical reaction, she's be hard pressed to describe it.

Last semester Kris and his friends vandalized Addie's lab, getting themselves thrown out of school. To make amends and potentially be allowed to re-enroll, Kris gets enrolled in Addie's experiment.  This has an unexpected (and unrelated) problem: every experiment where Kris and his partner get set up backfires in some spectacular way.  Where Kris is supposed to rescue the girl (and thus spark a romance) the person who ends up needing rescue turns out to be Addie.  And despite their torrid history and the test plan, Addie finds herself falling for Kris, which both proves her theory and invalidates the experiments.

This Emma-esque plot tries to liven up the rom-com with a bit of neuroscience.  It's cute, but a bit convoluted.  Addie's confusion about love seems more from being on the spectrum than from any confusion -- she just doesn't read people well.  That makes her eventual falling for Kris less plausible.  After all, she doesn't suddenly develop the cognitive skills to read faces.  Thus, where it tries to be different, it just gets muddy and hard to understand.  Cute title, but fairly predictable.
Posted by Paul at 12:54 PM