All the Impossible Things, by Lindsay Lackey 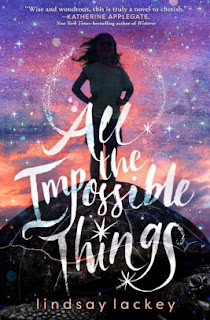 Red has been passed around to quite a few foster homes, but she's counting down the days until her mother is released from jail and they can be reunited.  She knows it will be hard.  Her mother struggles with addiction and Red isn't always the best of kids, but Red believes that everything that seems impossible is simply a different degree of difficulty.  She's collecting a notebook of so-called "impossible" things to prove the point.

When she ends up with the Grooves family and their collection of exotic pets, Red feels that she's finally found a place she can call home temporarily. Dearest to her is their giant tortoise Tuck, with whom she bonds.  But when the tortoise goes missing, her foster mother gets sick, and Red discovers that her biological mother was actually released months ago and has been hiding out, Red becomes overwhelmed by the seemingly impossible nature of her situation.

While mostly a down-to-earth (and touching) story of a girl who wants to piece her family back together, Lackey has thrown in a hint of magic: Red has the seeming ability to summon up storms.  This is used mostly as metaphor up until almost the very end.  It's cute and restrained and adds a wonderful undercurrent that does not distract from the overall message of finding family where one may.  That is representative of this largely understated and modest story.
Posted by Paul at 8:24 PM