If Only, by Jennifer Gilmore 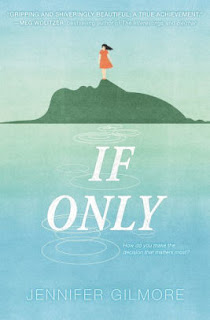 In 2000, sixteen year-old Bridget finds herself pregnant.  Unwilling to terminate the pregnancy and unable to keep the baby, she navigates the world of adoption, meeting prospective parents and trying to decide the best future for the child.  Sixteen years later, Ivy realizes that she is now the same age as her mother was when she was born.  While the adoption was open, Bridget has disappeared and now Ivy is determined to track her birth mother down.

Switching back and forth between Bridget and Ivy, the novel attempts to tell the story of the adoption and make several grander observations about the emotional impact of the process.  To assist that goal, there are several seemingly unrelated chapters inserted periodically into the narrative.  Each of these outline alternate realities (how things might have turned out if different decisions had been made). Some of these decisions involve Bridget (what Ivy's life with different adoptive parents might have been like) while others go back much further into the 1950s and 1970s to discuss alternative timelines involving grandparents and others.  The device doesn't particularly work as the ties are often not all that clear and are weakly written.

As a whole, I'm not a big fan of the regretful-birth-mother story line.  The assumption that something is lost when a child is adopted seems unkind and unfair to the many happy adoptive families. Furthermore, not every adopted child seeks their birth parents nor even has an interest in them.  Gilmore skirts that issue by making Ivy's adoption an open one, but her sympathies are clearly laid bare when she brings up a closed one in one of her alternate realities.  And while Gilmore acknowledges that reunions are not always happy, it's obvious where her bias lies.  But mostly, in the end, I didn't find the story all that well crafted.  It rambles and meanders, causing my interest to lag.
Posted by Paul at 10:56 AM