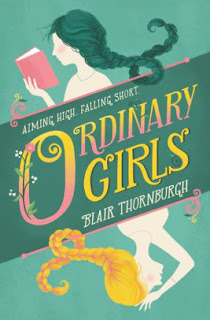 Young ladies may obsess now over to which college they will be accepted, instead of to whom they will marry, but in this modern send-up of Pride and Prejudice, the argument is made that little else has changed. Despite her best intentions, fifteen year-old outcast Plum has fallen for LSB (Loud Sophomore Boy) Tate.  Their old Victorian home is a death trap of peeling lead paint, thick walls that ensure that no one's cell phones have any reception, and bad plumbing.  When said plumbing fails altogether, Plum finds herself at Tate's house, borrowing use of his shower.

Her older sister Ginny anxiously awaits early acceptance at Penn  (but then, Ginny has a condition and is anxious about everything!).  Mother, who made her fortune illustrating a children's classic series about five country mice, is about to lose her source of income as her publisher decides to have all the illustrations redrawn by a new artist.  If Ginny cannot land a lucrative financial aid deal, what will happen to the family?

A clever mash up of Austen/Bronte tropes, modernized in a witty fashion, and guaranteed to appeal to the same gang that loved what Clueless did to Emma.  This is a more nuanced affair, maintaining more of the flavor and wit of the models, but does not necessarily break much new ground in the effort.  There is a point to be made here about the timelessness of Austen's books, but this is a rather peculiarly pedantic exercise in doing so.  Once made, the story itself is largely inconsequential and has much less to say about the world.
Posted by Paul at 8:24 PM