Tell Me Everything, by Sarah Enni 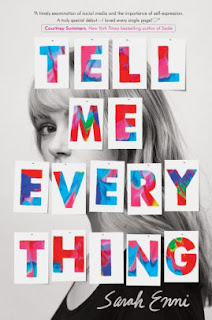 VEIL is a new social media app that allows artists to upload their work and comment on other people's art.  It's completely anonymous, local, and temporal.  Nothing is attributed, users see only posts from people within a five-mile radius, and after a week the postings disappear forever.

Ivy is obsessed with the app.  She follows it closely and has developed strong feelings about the submissions.  She's even tried to ferret out who the posters really are and suspects that many of them go to her school.  However, in spite of being an artist herself, she's never posted anything to the app.  She's never felt that her own work was good enough.

Instead, she's been trying to pay back the artists whose work she's enjoyed by doing kind things for them.  That requires figuring out their identities, but she finds that is the easy part.  Once she has ascertained who they are, she determines what would make them happy.  This starts off innocently with small anonymous gifts, but gets messed up with a separate scandal involving hate speech on VEIL and soon Ivy is in over her head.

If you live in the Bay Area (as these characters do), the idea of VEIL probably sounded great, but one has to wonder how interesting an app that only showed posts within a five mile radius would be if you live in the Midwest?  Or West Texas?

Beyond the silly premise is a story with fantastic clever ideas ranging from quirky bookstores to igloos to Ivy's wildly funny parents.  The problem is that the ideas don't really gel into a story. Layer upon layer upon layer gets added.  The result is rich but confusing.  My hope as I read the book that everything would get tied up (or at least the importance of the disparate items would become clear) is crushed in the end when the story concludes and it becomes apparent that much of the detail don't contribute to the story.  Telling everything in this case may not actually be beneficial.
Posted by Paul at 5:13 PM