The House With Chicken Legs, by Sophie Anderson 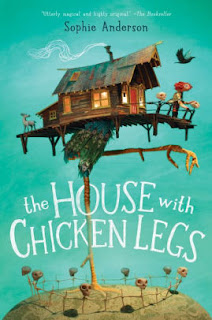 Marinka would like to have a friend, a living friend for more than an evening.  But when you live with Baba Yaga and your line of business is guiding the dead to the Afterlife, you don't get too many living visitors.  Every night, Marinka helps her grandmother welcome the dead to their house (which does indeed have chicken legs!), get to know them, and then send them on their way.  But one night, Marinka decides to break the rules and waylays a dead girl, tricking the girl to stay on and become her playmate.  This act of disobedience triggers a cascade of events that quickly escalates out of Marinka's control and she must find a way to fix things.

An touching story with one of the most unusual likable characters (the house) you've ever read about.  Loosely based on Russian folk belief, the story is actually a true original and touches on the universal theme of trying to find one's way in the world, especially when the path expected of you is such an obviously poor fit.  The macabre setting (which in itself will appeal to Lemony Snicket fans) is ultimately incidental to a story that is about Marinka's search for warm friendship and a sense of meaning.
Posted by Paul at 8:31 PM