The Wrong Side of Right, by Jenn Marie Thorne 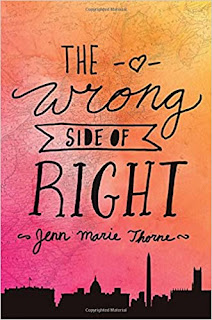 When Kate's mother died, Kate still had no idea of who her father was.  So when a New York Times reporter discloses that the leading Republican candidate for the presidency is actually her father, she is as surprised as the man is. Drawn by curiosity about her father, she gets swept into the whirlwind of his presidential campaign.

People warn her that she is being used, but she finds it hard to turn away from the father she yet to know.  A political neophyte,  she finds she has many friends and enemies and it is often hard to tell who is who.  So, when the incumbent president's son turns out to be an ally and then something more, she doesn't know whether to trust him with her confidence or to be wary of his motives.  Or maybe both?

A fast paced, delicious page turner.  Perfect for socially-distanced beach reading in the middle of a campaign year. The political details provide spice and plenty of opportunity for adventure, but it is the fancy clothes, the safe G-rated romance, and a lot of poorly supervised fun that makes this a great light read.

How far we've gone!  While probably meant to be cynical in 2016 when it was written. it's rather innocent ideas of political spin now sound shocking naive.  But never let a little suspension of reality get in the way of a fun read!  This is how we wish politics was:  where you can sneak off on a date with the cute boy (who happens to be the son of the president) and live to tell the tale!
Posted by Paul at 4:47 PM