What Kind of Girl, by Alyssa Sheinmel 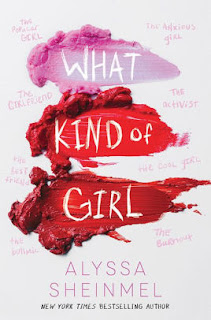 Maya has been putting up with her boyfriend's violence for the past three months, but when he blackens her eye, something snaps. She's no longer willing to cover up the assaults and she reports him to the school principal.  Predictably, this triggers side-choosing by the other students as some believe her and some believe him.  The story grows more complex and nuanced as Maya reveals faults and failings of her own that make her narrative less clear.

Maya's friend Junie, suffering from anxiety issues and a breakup with her girlfriend, falters between supporting her friend and being unable to do so.  She wonders how Maya could ever have allowed it to go so far.  What kind of girl would do that?  If Maya was truly being abused, why didn't she speak out?  And the more she learns, the harder it becomes to understand her friend's choices. Maya has no answers of her own -- she also wonders what kind of girl puts up with the violence.  But as the narrative reaches a critical juncture in Maya's story, Julie reaches her own crisis and her own bad choices prove overwhelming.

This is hardly the best novel about dating violence (I still hold up Sara Dessen's Dreamland for that honor), but it is probably the most complicated.  There's certainly room for trimming.  The bulimia and cutting that parallel the dating violence are clutter in my mind, but Sheinmel does manage to tie them in.  The romantic relationship of Junie and Tess is largely throwaway and never really added much to the story.  But the novel has many things going for it.

Sheinmel avoids absolutes (beyond the totally unacceptable nature of domestic violence) by creating flaws and nuances in all of her characters.  We want Maya to be a perfect person, so it hurts to acknowledge the mistakes she has made.  Ultimately, there is more pay off from this approach when the story reminds us that none of the flaws really matter in the end -- nothing Maya could have done would ever make her deserve to be treated as she was.  But in causing the readers themselves to waver it does challenged us with how easy it is to victim blame.

One little literary trick Sheinmel uses is particularly effective.  At the beginning of the novel, she doesn't initially name the narrators.  Instead, she gives them generic names ("the activist," "the popular girl", etc.) and we naturally assume a fairly broad cast of characters.  But gradually, we figure out that several of these narrators are actually the same person (just different parts of their psyche).  This serves a useful purpose: illustrating that people are not so internally consistent or singyularly focused.  They have complex (and competing) needs and motives.

On the subject of narrators, I was a bit sad to never hear from the boyfriend.  I recognize that Sheinmel didn't really want to give him a voice (she says at several points that it really doesn't matter why he hit her), but I think that's a strategic mistake.
Posted by Paul at 4:56 PM