A Constellation of Roses, by Miranda Asebedo 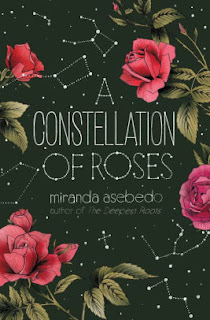 Trix possesses a near-magical talent for stealing things without being detected.  It's a skill that has come in handy while she and her mother have scrambled to survive on the streets. Since her mother disappeared, it has been essential but not quite enough.  When she gets picked up by the police, she is faced with a decision:  go to jail or go live with her father's family.

She never knew her father and, as far as Trix has known before now, he had no living family.  But they exist and they are willing to take her in as long as she agrees to stay out of trouble and finish high school.

The McCabes turn out to be an eccentric matriarchy that run's their small town's pie bakery and tea room. And like Trix, each of them has their own special talent:  her great aunt can tell fortunes, her cousin reads people's darkest secrets on touch, and her aunt  bakes magical pies that heal emotional wounds.

Trix has lots of wounds to heal.  But can she open herself to trust this family she never knew?  Or will she fall back into bad habits and return to life on the streets?

It's a familiar story, but well-told this time.  The characters are vivid and break free of the usual stereotypes.  The writing is beautiful, especially as Asebedo waxes poetically on family and identity.  And while everyone seems entirely too forgiving and the hardships a little too easily overcome, it is still an enjoyable and uplifting read.
Posted by Paul at 7:01 PM