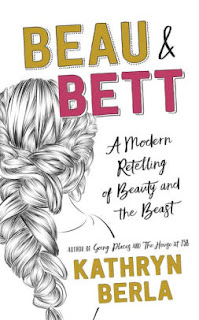 "Lucky in love, never lucky in life," Beau's father likes to say about their family. He's laid up from a work injury and unable to work.  Bett's sister is about to get married and money is tight all round.  And so when Maman is involved in a fender bender with the spoiled rich daughter of the Diaz's, the last thing the family can afford is a big repair bill.  Beau goes to the Diaz ranch, on behalf of his mother, to plead for forgiveness.  Mr. Diaz agrees to let the matter go, but only if Beau will come work off the debt at the ranch for the next four weekends.

And it's while he's working there that he gets to meet this troublemaking daughter, Bettina. She's got a reputation at school of being this horrible person which has earned her the nickname "the Beast." Beau finds out, however, that she's not like that at all.  And the more he gets to know her, the closer he feels towards her.

Allegedly a modern retelling of Beauty and the Beast, the resemblance is slight.  Working off a debt, a misunderstood "beast," and eventually learning to love someone we found initially repulsive are three similarities, but they are hardly unique.  Trying to call that a retelling is a stretch and a distraction.   Rather, the book's strength is really the dynamic between its two characters. Earnest Beau is no match for Bett's social ineptitude, and the sparks that fly between them are unexpectedly hilarious.  The resulting love story is short and sweet.
Posted by Paul at 2:00 PM