Rules for Being a Girl, by Candace Bushnell and Katie Cotugno 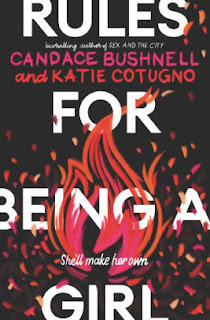 Marin is a bright and intelligent senior nearly guaranteed a spot at Brown, her first pick, in the fall.  Editor of the school paper, she hopes to become a journalist.  And if she has a weak spot, it's her harmless crush on her English teacher (and newspaper advisor) Mr. Beckett. "Bex" indulges her, adores her, and promises to help her get into Brown, where he has connections and can pull a few strings.  But there's something a bit off, a bit too friendly about Bex and when he kisses her one afternoon, things start tumbling down.

At first, both of them try to ignore the incident, but as he starts retaliating against her in class, she decides in the end to make a public complaint.  The results are devastating as the school administration circles the wagons, the student body turns against her, and suddenly her future looks to be in jeopardy.  But refusing to step down, Marin fights for her dreams and her future, taking on the school and its entrenched prejudices.

Being a well-manufactured product of Allow Entertainment, this is slick storytelling and the story and its resolution is superbly satisfying.  Surprisingly, it is also a disjointed mess in a way that only writing-by-committee can achieve.  There's a second theme to the novel -- Marin's awakening as a feminist -- demonstrated through her founding of a feminist book club at school with the help of another sympathetic teacher.  This would seem like a good complement to the #metoo story, as a bunch of highschoolers discover Audre Lorde and achieve enlightenment, but instead it breaks down into long discussions about POCs and other tensions between liberal and radical feminism that the average reader is going to glaze over.  It never ends up having relevance to the story.  And as for the eponymous rules, while they are striking and make a great back cover, they aren't really more than a tease, fitting into neither thread.
Posted by Paul at 5:43 PM