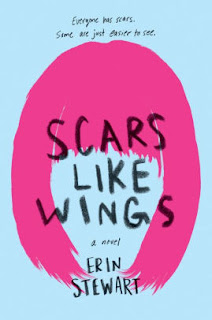 A year ago, Ava was the sole survivor of a fire that took the lives of not only her parents, but also her cousin.  It left her covered with third-degree burns.  After several months in the hospital and multiple surgeries, she went to live with her aunt and uncle, eerily filling in the void left by the death of their daughter.  And now, with a year gone by, the doctors think it would be a good idea if she were to "re-integrate" to everyday life and return to school.

With a face that is heavily disfigured and a body covered with grafts, she is most people's worst nightmare and Ava finds it hard to imagine being back in high school.  But with some support from another burn victim (the vivacious and over-the-top Piper) and Piper's friend Asad, Ava discovers that there is a life worth living.  It's hardly a smooth journey though.  Bullies and misunderstandings aside, both Ava and Piper have to learn that their worst enemy is themselves.

A satisfying and well-written story of overcoming adversity.  What the story lacks in novelty or surprise it makes up for with strong and interesting characters and its two protagonists in particular.  The complicated dynamic between the two girls and their run-ins with their shared nemesis mean-girl Kenzie provides a good pay-off.  Asad, the helpless (and mildly hopeless) love interest and Ava's aunt and uncle are more disposable, but move the story forward.  Overall, some trimming down would have helped but the book never truly drags and remains entertaining throughout.
Posted by Paul at 7:58 PM