That's What Friends Do, by Cathleen Barnhart 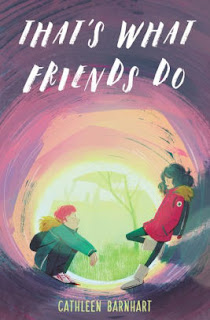 Sammie and David have been friends for ages.  But when a new kid Luke moves to town, things start to get weird.  David, who's never really given much thought to the fact that Sammie is a girl, resents Luke's attempts to hit on Sammie. Up until that moment, he didn't realize that he had feelings for her.  And Sammie, who's never really thought it mattered if you were a boy or a girl, is shocked at how she is treated by the boys. The resulting jealousies and misunderstandings that develop between the three of them will remind the reader of just how painful it was to be twelve.  But then, in an incident that occurs innocently yet is anything but, things go too far and the friendship splinters.  Feeling they have each been betrayed by the other, Sammie and David are left confused and unable to figure out how to repair the rift.

Meanwhile, Sammie is considering switching from baseball to softball.  She's the only girl on the team, but she's a good player and her father wants her to continue playing on the team.  But as she watches the other girls playing on the softball team, she realizes that it would be much more fun to be on their team than trying to prove that she can play with the boys.  Convincing her father to let her do so, however, proves difficult as he feels that switching from a "real" sport to softball would waste her talent.

An unexpected surprise of a book about sexual harassment, sexism, and the nature of consent in seventh grade.  Barnhart spins a terrifyingly plausible chain of events that plunge its protagonists into social situations that they are entirely unprepared to deal with.  The target middle school audience can learn a great deal from reading the story (and perhaps discussing with an understanding adult), but actually the book seems more beneficial to adult readers who can watch events unfold and better understand why things go as wrong as they do.  The side story about Sammie's rediscovery of the need for feminine companionship is perhaps not so integral to the main story, but fits in nicely.  In sum, a great age-appropriate contribution to discussions about sexual harassment and consent.
Posted by Paul at 3:26 PM