The How & the Why, by Cynthia Hand 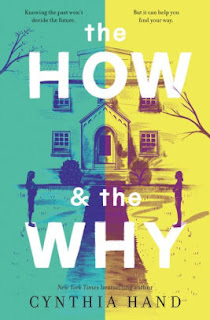 While Cass was adopted shortly after her birth, she's never felt that she somehow didn't have "real" parents.  Her Mom and Dad are in every way her real parents.  But as she turns eighteen, she's curious about her birth mother and she starts to make small steps towards tracking down that woman.  It's challenging because she was a closed adoption and whoever her birth mother is doesn't seem overly interested in finding her.  But the woman did leave behind a series of letters, written while the woman was pregnant recalling the circumstances of her conception and the process of deciding to put Cass up for adoption.  These unfold in alternating chapters against the contemporary story of Cass's search.

This fairly long novel also includes largely unrelated stories of Cass's attempt to get into the college of her dreams, her adoptive mother's search for a replacement heart as her own is failing, and some interpersonal issues with her best friend (also adopted) and a new boy at school.  These fit in, but largely don't add much to the story beyond feeding a very surprising (and slightly contrived) ending that pulls hearts strings but stretches credulity like a Bollywood romance.

There are plenty of novels out there about adoption and the vast majority of them split timelines to try to draw parallels between the lives of mother and daughter.  I think this one is more successful for not overdoing the parallels and for respectfully avoiding a forced reunion.  Also, never wavering from the conviction that adoptive parents are "real" parents seems truer to the experience and respectful to people who have been adopted.  Finally, while I found the subplots peripheral and largely extraneous, I enjoyed them as well.
Posted by Paul at 4:17 PM