The Speed of Falling Objects, by Nancy Richardson Fischer 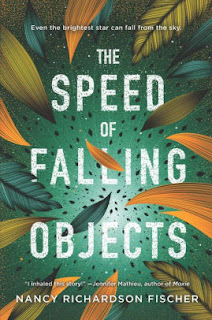 Danny lost one of her eyes in a childhood accident.  Shortly afterwards, she lost her father as he up and left her and her mother.  Convinced that she was at fault for her Dad's departure, she wrote him letters but never heard back.  But she watched every one of the episodes of his hit survivalist TV show as he fought nature and saved people's lives.  As strong as he seemed to be, he never seemed interested in what had become of her.  Then, right before her seventeenth birthday, he invites her out of the blue to participate in a new episode he is filming in the rain forests of Peru with hot young movie actor Gus Price.  Desperate to make a connection with her father, she begs her mother to let her go.

The trip ends up being more than anyone counts on when the plane they are flying into the jungle goes down in bad weather.  Lost in the rain forest, Danny, Gus, Danny's father, and a few additional survivors have to make their way back to civilization.  The jungle is full of dangers and the members of the party are gradually taken out one by one.  For Danny, it is possibly the last chance she will have to figure her father out, figure out how they became estranged, and discover who she really is -- a quest nearly as difficult as the physical challenge of survival.

Edge of the seat action moves this story briskly along, but it is the emotional journey that Danny goes through that ultimately makes this not only entertaining but fulfilling.  It's certainly not for the squeamish as there is stuff here to make just about anyone's stomach churn, but it is not overdone and the adventure feels real.  The obvious romantic angle between Danny and Gus hangs over this plot like a poisonous snake, but is mostly deflected.  Ultimately, the satisfaction of seeing Danny come to terms with the limitations of her parents and the recognition of her own weaknesses and strengths makes this novel enjoyable and worth reading.
Posted by Paul at 5:54 PM