When the Stars Lead to You, by Ronni Davis 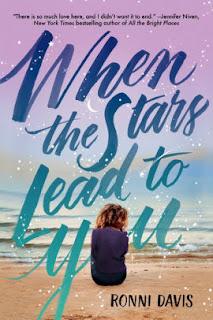 One unforgettable summer, Devon met Ashton on the beach.  As beautiful and wonderful as their summer romance was, it ended badly when Ashton disappeared without saying good bye, totally ghosting her.  A year and a summer later, Devon is starting her senior year and Ashton appears at convocation.  He's attending her school and subsequently back in her life.  Despite the reasoned pleas of her best friend, Devon can't help herself: she still loves him.  She doesn't entirely trust him, but this doesn't stop her from jumping back into an intense relationship again.  While she recognizes that she's getting in over her head (and that she can't afford to let it happen when she needs to be focused on her future), that doesn't stop her.

But some things have changed.  Ashton is fighting serious inner demons and Devon risks being swept away by his battle with depression.  And while family and friends on both sides try to intervene, in the end it comes down to Devon herself to make things right.

This is probably a book best avoided if you like your characters to behave rationally, because as much as one can understand the temptations that Devon is dealing with, her choice of a first love is pretty poor.  Never mind his clinical depression, this boy is manipulative and controlling.  He's really bad news.  As book smart and well-adjusted as Devon is, it's painful to watch her going down a rabbit hole for hormones and romantic fantasy.  But it's also painfully realistic and as much as we would all insist it would never happen, we all have either been there or know someone who has.  In sum, uncomfortable reading and, if that is your idea of a good romance, pretty intoxicating stuff!
Posted by Paul at 11:46 AM