All the Stars and Teeth, by Adalyn Grace 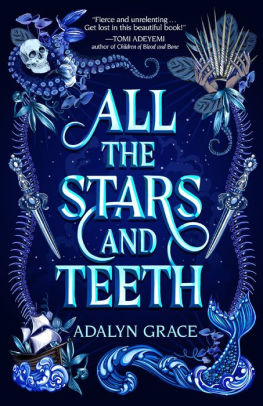 When you have reviewed close to 2000 books, it becomes harder and harder to find a book that feels truly novel.  And in few subgenres (beyond summer beach romance) is the repetitive and formulaic found more often than fantasy.  Swords, magic, monsters, and teen angst -- it's been done again and again.  Yet it entertains and when you want to just sit back and relax, it's great choice of subject matter.  No great surprises, just bloodthirsty action and mayhem.  So, imagine my surprise when I read this startling original debut fantasy adventure from author Adalyne Grace!

Amora is the princess of Visidia, a kingdom made up of seven islands.  Each island practices its own type of magic (levitation, shape shifting, healing, earth moving, time enhancing, and "curse").  Each person can practice only one type of magic.  To attempt to master more than one is the path to madness and forbidden.  And ruling over them all is the magic of the Visidian royal family -- soul magic.  Heir to the throne, Amora must master the family's monopoly -- the ability to destroy a human from within by crushing their soul -- to prove herself worthy of her title.  And when she fails her test, not only her legitimacy, but her life as well becomes forfeit. To her rescue comes a young pirate Bastian who helps her escape.  Her doggedly loyal fiance Ferrick follows along and proves his value through healing.  With time, they also pick up a mermaid named Vataea as a guide.

The stakes are higher than Amora's challenges in mastering her magic. The entire kingdom (and the core principles that support it) are under challenge.  There is a rebellion afoot and the kingdom is under siege.  It is also under challenge from within.  Amora and her compatriots must confront an ancient curse that lays bare the corruption of their entire society and find a way to rebuild it.

There are plenty of familiar fantasy tropes in the bare story, but the directions that each one goes in will leave you surprised.  Even the obvious final showdown between Amora and the leader of the evil forces doesn't quite unfold according to plan.  And the defeat of the bad guys is in fact never truly confirmed in this enlightened 21st century take on the battle of good and evil.

That's where the story starts getting really interesting.  There's an obvious romantic triangle at play here (Amora, Bastian, and Ferrick), but it doesn't play out as one would imagine.  Magic interferes with free will and the characters don't quite cooperate with the usual unfolding of a fantasy romance.  Sure, there's some great passionate scenes in the story, but these characters are wiser than that. Amora, while she is fully capable of lust, is not throwing herself at either of these boys.  She has more important business at hand that picking up a prince.  It goes almost without saying that this a realm of unremarkable gender equality where men and women are equally capable fighters.

That's really just the beginning of Grace's social and political critique.  While there's no mention of American politics, it isn't hard to see the agenda and the striking critique of the story.  This is a fantasy novel for Trumpian America, from a king who knows no moral boundaries to holding on to power to an inner circle who struggle to maintain the status quo for the benefits they reap from it.  The gradual unveiling of the sheer scope of the degradation (through the concept of "soul magic" and the way it both empowers and corrupts) couldn't be a clearer parable to modern party politics.  This is a deliciously subversive book.

Finally, this is a great story.  Amora has a highly satisfactory dramatic arc, from callow, selfish, and materialistic, to ultimately self-sacrificing leader as a young woman who comes to understand the sacrifices one must make to earn the trust of her people and the wisdom necessary to rule.  Highly recommended.