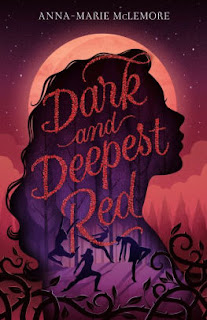 A complicated story of magic and historical destiny.  In the 16th century, a curse befalls the city of Strasbourg.  Women start dancing uncontrollably, unable to stop until they collapse from exhaustion.  Two local Romani women are accuse of witchcraft, consorting with the devil, and causing the affliction.  Five hundred years later, Rosella Oliva, from a famous shoemaking family, finds her feet bound to a pair of red shoes that take over control of her body and make her dance.  Her friend Emil, a budding young chemist, comes to her aid to solve the mystery, which ultimately involves identifying his blood connection to the two women from the past.

It's a strange story, often difficult to follow, but beautifully written.  In general McLemore and their books are this way: thick and meaty prose combined with strange magic and deep meaning.  It makes for slow reading and a great deal of effort.  In this case, I'm not so sure that they succeeded as much as they had hoped.

The story intends to combine a real historical event from the summer of 1518, when a large number of women were indeed afflicted with an uncontrollable urge to dance, with Han Christian Anderson's "The Red Shoes." It's clever but the author assumes the reader will make connections and be as obsessed.  You can see McLemore's excitement, but it's hard not to feel left behind.  In addition, attempts to work in themes about gender identity and sexual agency, while well-intentioned, felt forced and like an attempt to give a pretty and clever fairy tale some last minute gravitas.  Overall, I found the novel to be a collection of ideas that never really gels.
Posted by Paul at 4:41 PM