Every Reason We Shouldn't, by Sara Fujimura 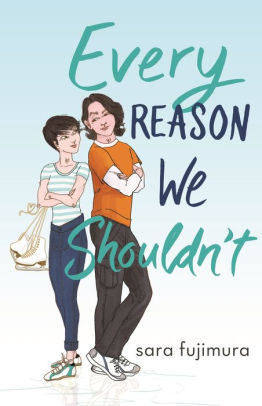 When Olivia crashed and burned in her last skating competition, it seemed that her dream of heading to the Olympics was basically dead. She would never get to reach the heights of her world famous Olympian parents, but instead simply be stuck in Phoenix helping out at her family's struggling ice skating rink.  Still, not everything about the change is bad.  No longer pursuing professional skating opens up the chance to be a normal teenager, attend regular school, and start exploring her other dreams.  And there are definitely downsides to a career in skating as she can see as her mother struggles with physical damage from her years in the limelight and her father is stuck out on a grueling tour with Olympians on Ice in order to pay the bills.

Then a young speedskater named Jonah shows up.  He and his family have relocated to Phoenix and he needs a place to practice for his Olympic bid.  He brings much-needed money to pay for his rink time, but he also reignites Olivia's interest in skating.  Chemistry builds between them, but their dreams are leading them in different directions.  Meanwhile, Olivia's mother is taking a turn for the worse and she needs expensive medical treatment that they cannot afford, unless they sell the rink, leaving Olivia without her home base.

A satisfactory romance and athletic adventure, but the storytelling slips off the rails too often for my tastes with muddled endings and incomplete idea.  Some of the key plot points that never quite get finished explored include Olivia's biracial background and the possibility of Olivia and Jonah skating together.  These are not casually mentioned ideas.  They are actually built up steadily through the story, but then get tossed aside and forgotten.  Climactic moments in this book tend to be confusing to track (I did a lot of re-reading).  Action just isn't Fujimura's strength.  That's a problem.  No matter how good the characters are, if the story doesn't deliver, they are basically orphaned, and that is what happened here.