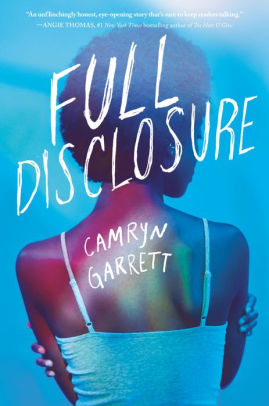 After being essentially driven out of her old school, Simone is starting over again at a new one.  She's gotten to be the student director of her school's production of Rent and she's fallen for the very cute Miles.  But she's haunted by the truth she can't run away from:  she's HIV positive (and has been since birth).  And while this sensitive fact about her ought to remain private, she knows that she needs to come clean to Miles and to others she is close to.  Someone, however, is trying to beat her to it and leaving her anonymous messages threatening to out her if she doesn't stop dating Miles.  Determined to fight back, Simone risks everything to stand up and retain her life.

Garrett's debut novel shows a writer of great promise.  Simone is a complex protagonist: a mixed-race bi-curious young woman who is open about her feelings and her needs.  Her relationship with her two dads is something of a revelation in its closeness and mutual respect.  And pretty much all of the characters in this diverse and richly drawn story are interesting and unique.  Unfortunately, the story has serious execution problems:  from its clunky extortion plot to its lack of focus on its own plot points, this can be a maddening read.  Really interesting characters stumbling through a poorly developed script makes me hope for better on her next outing (and leaves me looking forward to checking out that novel).