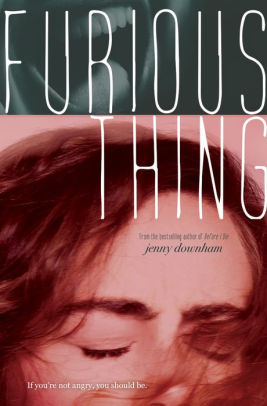 Lexi has a fiery temper, is quick to verbally lash out when she feels attacked, and prone to violence.  Her peers and the adults around her can't make sense of it.  Little things seem to set her off. Her reactions are entirely out of proportion.  Her mother and stepfather-to-be fret and worry about what to do with her.  He thinks it might be time to look into medication or institutionalization.  And for the first hundred pages or so, the reader is pretty much in agreement:  Lexi's about as unsympathetic a protagonist as one could dream up.  I honestly was about to toss the book.

But then the veneer starts to crack and the reasons for Lexi's seemingly inexplicable behavior become -- shockingly -- clear.  Her family is deliriously dysfunctional.  Her mother is obsessed with pleasing her fiancee, a man who turns out to be a cruelly abusive control freak.  He gaslights the entire family and drives away anyone who has the strength to leave (including her first wife and his son).  For those who don't have the strength like her mother and her half-sister, Lexi stays around to defend them by "becoming the monster"-- turning violent as a way of redirecting his abuse towards her.

Lexi gets described midway through the book as a "survivor," but she's much more than that: a total badass, proto-mama bear, and general monster.  Lexi would describe life as a fairy tale, but she would mean that is the sense that it is a story in which you stuff witches in ovens and burn them alive.  She's a tough and brave character, but she's also achingly weak and lonely.  Ultimately, she's inspirational, working her way from victimhood to angry rage to choosing to cultivate love instead of hate.  And finally, to finding her voice and understanding that love isn't something we earn.  It's something we simply deserve. Because the writing is so good, I'll try tempting you to do so the same by giving away that things sort of work out in the end, so you can at least see Lexi pull herself out of her trap.  But you won't come out feeling that good about grownups.

Unpleasant characters and a gripping story line make this a novel you hate reading but don't quite manage to put down (unless you're strong enough to just walk away).  I'm not that strong, so I was there to the bitter end. This is an angry book (written by an author who wants us to be angry as well).  If you like a book to really piss you off, then this is an excellent read.