I Know You Remember, by Jennifer Donaldson 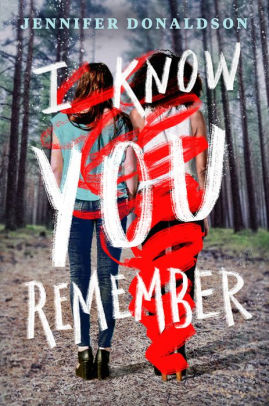 Three years ago, Ruthie and Zahra were close friends, hanging out at a fort they created at an abandoned neighborhood playground, co-writing their own fantasy stories.  But when Ruthie's mother and father split up and Mom took Ruthie with her from Anchorage to Portland, the girls drifted apart.

Now, Ruthie's mother has died and Ruthie is returning to Anchorage.  She can't wait to catch up with her old friend.  But when she gets back, she finds out that Zahra has gone missing.  A few nights before, at a party where Zahra and her boyfriend Ben had a big blow-out fight, was the last time anyone's seen Zahra.  Like everyone else, Ruthie is eager to find her friend and she dives into the search effort.  But as Ruthie gets to know Zahra's new friends, she finds a lot has changed in the past three years and that maybe she doesn't know her old friend all that well anymore.

The review I thought I was going to write when I was reading this book was overshadowed by a large twist in the last forty pages of the book, when the story switches narrators and point of view.  Obviously, I don't want to spoil the ending, but it's quite jarring and a lot of the story that is built up gets tossed aside and abandoned.  Not just stories, but entire characters are discarded as the entire purpose of the story is re-formulated in front of our eyes.  I have done a bit of soul searching about this, thinking about whether I missed clues or foreshadowing, but there really isn't much to justify the shift.  It's jarring and it feels artificial -- a gimmick to startle the reader.

If we back up and consider the story up to the moment of the twist, this is fairly by-the-numbers stuff.  Ruthie's journey of discovery as she comes to understand the changes that Zahra has gone through and her fleeting romance with Zahra's ex-boyfriend create a decent character.  The setting in Anchorage is nicely atmospheric and the action unfolds at a decent pace.  It's a decent but unremarkable story.  But again, that very late plot twist mangles most of that set-up, leaving us with a new story that felt like it involved entirely different characters and seemingly unrelated motives.  Startling, but it didn't work for me at all.