What I Carry, by Jennifer Longo 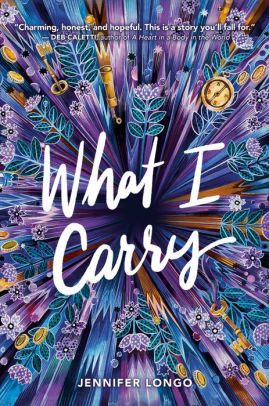 Muir has learned from seventeen years in foster care how to survive:  travel light and don't make friends.  That way it will all go easier when it's time to go.  Whenever things have gotten tough or they have gotten too good, she's known it was time to go.  Now, within a year of aging out of the system, she's almost out!

Being free is a mixed blessing. She'll also be without support and without a distinct plan.  But that's OK.  She'll figure out a way to manage -- she always has.

Aging out gracefully and starting anew, however, is thrown awry in her final placement.  She's been sent to an island and placed with a woman who is herself about to retire from fostering kids.  Muir, who has tried so hard to form no connections, finds herself drawing closer to her foster mother, forming bonds with two kids (Kira and Sean), and even becoming attached to the family dog.  No matter what Muir may intend, it would seem that one cannot always travel light.

A pleasing story about foster care that hits all the right notes. Longo has made some effort to avoid the usual tropes about violence and sexual abuse stories in foster care, and instead pulled up lots of unique anecdotes from foster children she's interviewed.  It gives Muir an intriguing backstory to share through the novel.  The ending is intentionally very happy (although leave it to Muir to try to sabotage it all the way up to the end) but avoids getting too weepy, retaining a modicum of authenticity and faithfulness to the characters.  That's challenging and the only real blemish on the story is a degree of repetitiveness that sets in as Longo struggles to get everything right.