Every Moment After, by Joseph Moldover 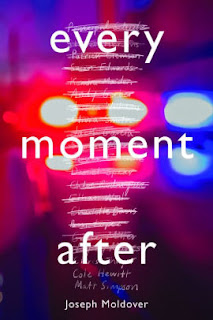 Eleven years ago, a shooter came to school and left seventeen first graders and their principal dead.  Now, it's time for the survivors to graduate and for the town to say their final goodbyes.  Many families have moved on but enough of the living remain to turn this graduation ceremony into a memorial.  The news will pick up this grim milestone as just another story, but for the survivors there is no real moving on.

This novel picks up at that commencement exercise and traces two young men who survived the incident and how they spend the summer after school:  Cole (who became a poster child, with the picture of the police chief carrying his body out of the school as the primary image of the tragedy) and Matt (who survived by luck, being home sick that day).  For them, this final summer is also their goodbye and time to actually move on.  It finds them revisiting things that they have dwelled on for the past eleven years, but now finally have to let go.

I liked the idea of doing a survivor story like this.  Few books on the subject have taken such a long-term view and it is a meaty subject in need of a proper treatment.  The school at which I spent my freshman year (Simon's Rock) went through a shooting incident itself, so I know something firsthand about the subject.  On that basis, I felt that Moldover handled the combination of guilt, fear, and anger particularly well.  And he explores the subject from so many different angles:  local townspeople, first responders, civic leaders, as well as the children and their families.  This is done so seamlessly that you never really become aware of how thorough Moldover's sociological exercise is until you put down the book and reflect back on what you've learned.

I also liked the novelty of an authentic boy's YA book.  The vast majority of YA is written for girls and the few writers attempt a straight masculine perspective.  When you do find a book about boys, it usually wallows in gross-out and horn-dog stereotypes.  Deep, introspective novels about adolescent males are very very rare.  Thus, it is rewarding to find that Cole and Matt are emotionally complicated and authentic male protagonists.  I related to them in a way that I rarely relate to YA characters.

With all that said, it may surprise that I don't actually recommend the book.  I found the story a hard slog and the ending mystifying and frustrating.  There are amazing moment of brilliance in here, with much of it coming from the adult supporting characters, but the boys themselves never seem to pull themselves up or grow in the way I needed them to do.  That made the ending ultimately unfulfilling.