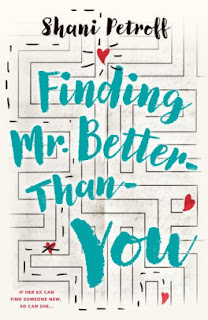 Camryn gets a rude shock at the start of her senior year when her guidance counselor informs her that her lack of extracurriculars is probably going to doom her chances of getting into Columbia.  This is followed by a very public dumping by her boyfriend Marc at a local hangout.  All of which leads to a lot of re-examination of priorities as Cam realizes that she has defined much of her life by trying to be there for Marc, instead of for herself.  While this reflection has some positive effect and sends her out to try trying new things, including joining yearbook, writing for the school paper, and becoming a school mascot, too much of the old ways persist.

Cam is a fan of rom-coms and believes that there is a "Mr. Right" out there for her.  At first, she's convinced that it's still Marc and so she tries dating friends of his to make him jealous.  When that doesn't work she tries finding a new boyfriend on her own, and eventually her friends try to set her up.  None of it really works and she eventually figures out that she is just trying too hard.  Through it all, her friends are loyally there for her and by the end of the novel she finds that Mr. Right actually isn't anywhere nearby, but since this is high school anyway, maybe it's just fine to stick to having friends.

Why this takes her an entire novel to come to terms with is anyone's guess.  She's pretty bright and intelligent and keeps on reminding herself that she has great friends, but her stubborn determination to find a boyfriend at least gives us a story to track, even if it doesn't always make much sense.  None of it is particularly dramatic and the story really doesn't have much of a point to make beyond the fact that high school dating pool is pretty shallow,.  The book is readable and mostly enjoyable, like the rom-coms that Camryn enjoys so much.