It's My Life, by Stacie Ramey 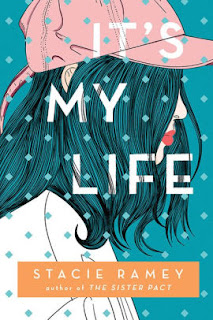 Jenna's always been a fighter.  Born with cerebral palsy, she's been through countless treatments and surgeries, and endured the challenges of crutches and wheelchairs.  She's worked hard because she's felt that her condition was simply bad luck.  When she uncovers the fact that she was the subject of a medical malpractice suit against her obstetrician, she comes to realize that it was her doctor's fault that made her this way.  Angry at not ever being told the truth, she gives up on her studying and starts to demand a voice in her own treatment.  And when her parents refuse to consent to the latter, she sues them for medical emancipation.

At the same time, Julian, a boy that Jenna once knew from years ago, has moved back into the area.  He's lost much of his confidence but none of his charm, and Jenna reaches out to him, rekindling memories.  But afraid of being rejected, she sends him anonymous.  These develop into mutual affection.  But now Jenna is afraid that if she reveals herself to him as the correspondent that he'll reject her because she is crippled.  Eventually, of course, all must be revealed.

Great characters, including a surprisingly strong finish from Jenna's parents, coupled with a lot of growth from Jenna makes this a moving story.  But I still found it a hard slog because of the uneven pacing and storytelling.  Important details are easy to miss in a story that frequently seems to drift.  Key plot points are poorly explained, leaving mysteries that the reader has to work hard to figure out.  It doesn't help that the two separate stories don't overlap and never come together.