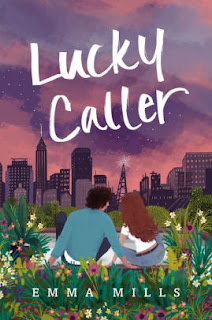 When Nina signs up for an elective in radio broadcasting in her senior year, she finds herself stuck with a bunch of misfits and an old friend, Jamie.  She and Jamie haven't talked much since an unfortunate kissing dare back in middle school, despite the fact that they live in the same apartment building.  But now that they are working together, the opportunity arises for a lot of old baggage and forgotten feelings to  reemerge.

At the same time, the radio show causes Nina to reconnect with her estranged father.  A local celebrity when he was a DJ in the area (before moving out West and becoming a major star), Nina talks him into appearing on their radio show as an attempt to boost their ratings and improve their grade.  But when a rumor starts up that the upcoming "surprise guest" on their show is actually an underground musical recluse named Tyler Blight, the event blows up into a major event.  Faced with disappointment from rabid fans who are planning to attend the broadcast of the interview, Nina and her team have to figure out a way to manage the event.  But when Nina's Dad bails out and fails to show, an unexpected angel saves the day.

A bit of a messy plot (including a romance that never really clicks and a family reunion that peters out), Lucky Caller is rescued by an ending which is as heart warming as it is completely ridiculous.  Surprisingly, none of the loose ends really start to bother you until you have finished the book.  It's a feel good story with lots of good ideas, most of which never quite gel or come together, but it remains enjoyable throughout.