Me, Him, Them, and It, by Caela Carter 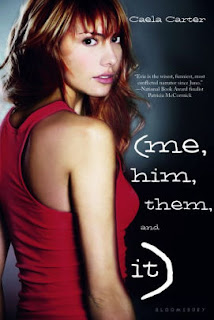 Evelyn ("me") is pretty surprised when she finds herself pregnant.  She'd only let Todd ("him") have unprotected sex a couple of times! She was getting a prescription for the Pill when they found out it was too late.  Telling her estranged parents ("them") about it is incredibly difficult, but she'e eventually going to have to find a way to do so.  In the end the baby ("it") is coming, whether she's ready for it or not.  And for the most part, she's definitely not ready!

Evelyn is a very difficult character to get into.  Reviewers have compared her to Juno (from the eponymous indie film), but I think of her as more like Cher (from Clueless -- or Emma, Cher's model).  She's lost and confused but also maddeningly stubborn and difficult to like.  She sees everything negatively.  She hates everyone (including herself).  Her best trait is her steadfast refusal to make decisions.

Some of these flaws are understandable.  She has emotionally cold parents and no role-model for empathy, but she's intelligent and insightful.  So her inability to overcome those barriers (and yes, she never overcomes them) is off-putting.  It's also understandable that the decisions she needs to make would be hard for any adolescent, but plenty of them do make the decisions, so Evelyn's refusal to even try is hard to sympathize with.  But it's realistic.

So, I'm left with a conundrum:  the novel's well written with a complex protagonist, well-drawn supporting characters, and (with the exception of some minor rushing of the story at the end) decent storytelling, but it's not a fun read.  I didn't like Evelyn but I found her authentic enough to care about her and that's a strong mark in this book's favor.  Ultimately, I didn't find it a redeeming story, but I learned things from it.  I think few authors have done as good of a job at getting inside the head of a pregnant adolescent girl before and Carter does an amazing job.  In Evelyn's case, it's not a pleasant place to visit.