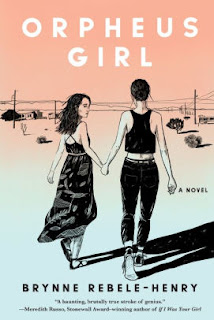 Living in her small conservative town is dangerous for sixteen year-old Raya and her lover Sarah.  They've seen how the town deals with other kids who come out as homosexuals, but they feel powerless to avoid the certain outcome.  While they try to keep their relationship a secret, they are eventually found out and sent away to a remote conversion camp:  to be made un-gay.

The rest of this short book outlines the horrifying torture that Raya, Sarah, and other teens undergo in misguided attempts to "cure" their sexual orientation.  The author tries to give the story some weight by drawing analogies to Grecian myths, but these are fairly subtle and likely to be overlooked.  The storytelling is anything but and comes with a content warning, but compared to similar YA novels, I wouldn't consider this story particularly triggering, even if it is certainly not a pleasant read.

More fundamentally, the story is thin.  Raya and her background as a closet lesbian in her small town is an interesting story.  Similarly interesting is Char, a "cured" lesbian who now works at the camp administering electroshock therapy.  But neither they nor the other characters are all that well developed.  The book has shock value, but without much character development this is largely senseless.  More character study could have added gravitas to what is just pretty words about ugly things.  For a better treatment of the same subject matter, see The Miseducation of Cameron Post.