The Girl Who Speaks Bear, by Sophie Anderson 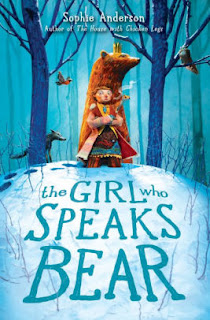 Discovered in the woods when she was a baby, Yanka has never quite felt like she fit in her village.  For one thing, she's so much stronger than the other children.  Her Mamochka watches her closely and seems overly protective, keeping Yanka as far away from the forest as she can.

One day, after she's turned twelve, Yanka wakes to find that her legs have turned into those of a bear.  Afraid of what the villagers will think of her transformation, she flees into the woods.  As she does so, she is reminded of a story that a woodsman named Anatoly told her about a girl whose family were cursed with living their lives as bears.  In fact, as she ventures in deeper, she begins to realize that a whole series of fairy tales she has heard over the years address her current predicament.  Anatoly the woodsman wasn't just telling her stories, he was trying to tell her about her own life.

The stories, which are delightful in their own right, are interspersed throughout Yanka's quest -- a trek that will include defeating a dragon, saving a magic tree, and eventually risking everything to save her village from a raging forest fire.  Each fairy tale, while a digression, serve as an oracle of what is to come,  in an ambitious attempt to demonstrate the role of fairy tale and myth in culture.

While this novel is more ambitious, I found Anderson's first novel (The House with Chicken Feet) more whimsical and fun.  Both books borrow creatively from Russian folk tale, but this second time around there is a lot more ground to cover and a plot which is more complicated and oft times confusing.  The endless feats that Yanka must confront and overcome become exhausting and one wonders if Anderson could have trimmed it down.  It certainly feels, in all that complexity, that the magical simplicity of a fairy tale is basically lost.